Scientists once again confirm the presence of the Cosmic Web, or Net of Light! 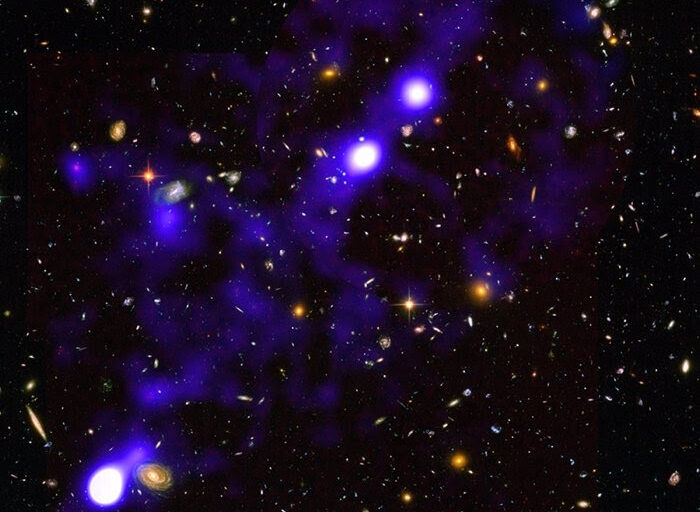 Scientists once again confirm the presence of the Cosmic Web, or Net of Light!

“According to our models of the Universe, and mounting evidence, filaments of dark matter connect massive objects such as galaxies and galaxy clusters in a vast, cosmic web.
In the culmination of years of work, an international team of astronomers led by Roland Bacon of the Lyon Astrophysical Research Center in France has just directly imaged several filaments of the cosmic web in the early Universe, roughly 12 billion light-years away.
Their results are not just some of the strongest evidence yet for the cosmic web; they also found evidence that a large population of dwarf galaxies powers the hydrogen glow within the filaments. This discovery could dramatically alter our understanding of galaxy formation in the infancy of the Universe.”
Astronomy & Astrophysics
For more in-depth reporting, click here.
A note from a grandmother …
Thank you for sharing the precious word from the Grandmother’s.
In Summer of 2019 I was guided to print off one of the teachings that you had emailed.
I taped it, along with some affirmations of God’s love that I wrote, to the chain link fence that is near my property.
There were many homeless (Native Americans) living in their cars along my clinic street and unfortunately there was much drug activity at night. During the day between patients I would go outside to talk to some of the people.
A neighbor told me that she saw a homeless man pace back and forth in front of the fence one day. He stopped and read the Net of Light article, resumed his pacing, stopped and read, then paced again. The third time he read the article, he removed it from the fence, carefully folded it and put it in his pocket. My response to my neighbor was “YES!” He was precisely the person who was supposed to receive that information on the fence.
Several people commented to me that they stopped to read what was put up on the fence and that they looked forward to seeing what was new. I thought of it as God’s bulletin board for the neighborhood. The construction is done, the fence is gone as are the people who were there for those weeks that summer. It all felt divinely orchestrated.
Patti