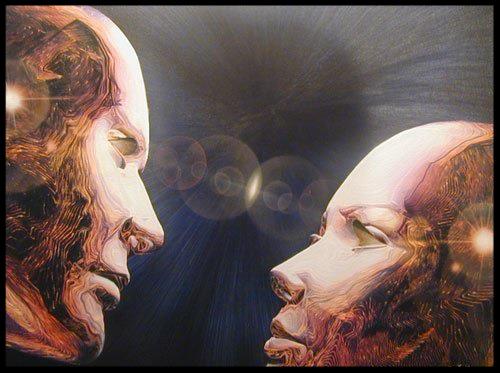 “Men and women, women and men,” the Grandmothers said, their heads nodding up and down.  “This situation is shaking down now and soon will become clear for all to see.  There’s been such an excess of yang energy for so long that today it overhangs the Earth–covers everything.  So much so that you haven’t been able to see past it to the true relating of the sexes.  Woman has been so smothered by excess yang that she doesn’t know her own self, let alone men.  But awareness is coming,” the Grandmothers said, humming to themselves,  “It’s coming.”
“Woman does not exist in reaction to man,” they said.  “She is not his ‘helpmate’ as the old patriarchic model states.  That is not it at all.  The real relationship of man and woman is a glorious thing to behold; yet you have never seen it.  In fact, you’ve never even heard of or imagined it.  It’s finer, truer, more magnificent than you can envision.  Wait and see,” the Grandmothers said, their faces lit by secret smiles.
“When man finally relaxes his death grip on power, then his true magnificence will step forth.  And when woman stands straight up in her power, well!” they exhaled, “then there will be something to behold.  Women and men together will create such beauty, such goodness that your Earth will be a different place indeed.  It is coming,” they repeated, their heads again nodding in concert.
Then they looked up, locked their eyes on mine and said,  “Until that time comes, take as many steps forward as you can.  Women,” they announced, “it is through your relentless, loving pressure on them and through that alone that man will awaken to who he really is. Do not let up on men,” they said.  “Hold them to the truth.  Accept no half-hearted explanations, no feeble apologies.  Insist on sharing what you see with them and do not hold back.  Be kind, but be relentless.  Now is the time to work hard for the great coming together of the sexes.
“You are the ones who must do this,” the Grandmothers said.  “Men are too afraid and too shut down to look within themselves.  Help them,” they said, tears in their eyes.  “Tell them what you see.  Tell them what you feel.  Encourage them to ‘step up’ and then accept no substitutes for that.  The time has come at last and as we told you right from the beginning, Women Must Lead.  It can be no other way.
“Go forward now and do the work at hand,” they said.  “We are proud of you.”